Guardian Angel of the Good Death

If you’re lucky enough to see you parents into old age, you know its coming.
For me it began August 2012, with a cancer diagnosis for my mom.

Having just attended the funeral of our good friend who died from stomach cancer the week before, I knew how this story would end; with a little gray person gasping their last breath as they left this world.

I also knew there could be a lot of life crammed into the between-time. I just didn’t know how long that between-time would be.

And I knew she had to outlive my dad, who was 9 years her senior at 88 and very much counted on her to love and help him in his every waking moment.
My mom knew this too, but neither of us said it out loud.

Soon after August 2012, I came to the realization that not only would I have to make sure my parents lived well. I also had to make sure they died well.

I was not in denial about the inevitable, but, like Scarlet, just preferred to “think about it tomorrow”. Besides, we were very busy with many doctors visits, surgeries, hospital stays, picture taking and memory making in the between-time.

“Tomorrow,” however, came in December 2015 and then again in June 2016, when my parents passed away within 6 months of each other; my dad first…the natural order of things.


The sequence of events, twists, turns, plans, unknowns, changes, red alerts, whens, hows and ultimate absolute clarity of what was to be…was dizzying and remarkable. The Serenity Prayer was my mantra for a time.

I was fortunate, honored and determined to be present for each parent, before, during and after their bodies shut down.

In fighting…and then not fighting the inevitable…

In embracing comfort, but shunning heroics…

In vigilantly preparing for and guarding the sanctity of a peaceful ending, I felt every bit the Guardian Angel of the Good Death as each passed from this world with my sister and I “in loving attendance” as the obituaries for my mom and dad both read.

It was absolute closure, the feeling of a pulse and then not feeling it, the belabored breathing with the steady metronome click… and then its absence.


And then, the eggshell time immediately afterwards when ostensibly nothing has changed…except for everything.

And since it was impossible for me to write these words just a few short months ago, I painted it.

The painting was originally called Guardian of the Passage…attempting to politely skirt using the word “death.” But, just before submitting it last November, to the 58th Annual Mid-States Competition at the Evansville Museum in Indiana, I decided to call it what it was, and renamed the painting, Guardian Angel of the Good Death. She was accepted to the Evansville show and awarded a Merit Prize.

Now I’m thrilled to report that Guardian Angel of the Good Death was juried into the Eighth Annual May Show at Lakeland Community College. Started by Gallery Director, Mary Urbas, eight years ago, The Lakeland May Show holds its place as one of Northeast Ohio’s premier Juried Exhibitions. This year, the May Show’s street cred was increased exponentially as the juror was none other than, Lou Zona, the director of the Butler Institute of American Art (which hosts Northeast Ohio’s other premier Juried Exhibition…the Butler Midyear Show.)
Here’s an awesome Joseph Clark review of the May Show at Lakeland, its themes, its highpoints and its insights…in CAN Journal. Many of these stellar and thoughtful paintings are shown and discussed and, I’m particularly excited that he spent so much time talking about “Guardian Angel.” Check out the review.


Guardian Angel of the Good Death was awarded
Best in Show
at the awesome self-portrait show at the Summit Artspace in Akron,
juried by Ron White

Me, Myself and I
through September 3
Panel Discussion August 29 at 7:00
Summit Artspace
Akron, Ohio

That was my mantra for the excruciatingly long month of December 2015. The month of healthcare hell that included three hospital stays…two for my mom, (who, thankfully did well for another six months), and one for my dad, who, at 91 passed away peacefully.

I thought of this mantra myself. It is decidedly different from “slow down!”  To me, “slow down” de-values and tries to correct what you’re doing. It’s an annoying platitude, chanted by the cloyingly unflappable, for whom everything always seems to work out.

No, “Do everything slowly” is a positive action, a procedure with instructions, an artful dance with grace, observation, thought and dutiful acceptance of a job to be done, at its very core.

“Do everything slowly” allowed me to control my process of letting go of control… it was a Serenity Prayer of sorts.

We all know “The Serenity Prayer”…even if you didn’t hear it at an AA meeting. I was reminded of it again, when we chose this verse for the prayer cards at my dad’s funeral. It seemed fitting to his calm demeanor in life, and to our surprise at the elegance and timing of the events leading to his death.

“God, grant me the serenity to
accept the things I cannot change;

The courage to change the things I can;

And the wisdom to know the difference”

I did, however, control what I could and took to the canvas whenever a break in the daily healthcare/funeral/administrative business presented itself.

The beekeeper paintings had been working themselves around in my head for months now…and it was time to put brush to canvas. My talented muse, jewelry artist, Kim Mettee obliged and wore the beekeeper protective netting and I was presented with the challenge of creating a painting where I couldn’t rely on a face to pull it together. Instead I had to focus my attention on the hands, the pose and the specifics of the mesh netting.

I added the bees, and the concept of controlling what I could amid a conflagration of painful confusion…came together profoundly. So profoundly, that I worked on two paintings based on this subject simultaneously.

The second painting, Serenity Prayer is below, and was selected by curator Alia El-Bermani to be included in Sight Unseen, a  Poets/Artists Magazine exhibit at the Abend Gallery in Denver, Colorado. Happy to say she found her forever home with a loving collector.

The show is over, but you can still purchase the beautiful catalog!

Serenity Prayer: Acceptance
(at the very top of this blog)
is still available and will be showing at:
Cleveland Figurative at the CAN Triennial at the 78th Street Studios

What’s all this you ask?
Here are the answers you seek, young padawan!

I’ll be showing with these rockstar figurative artists:
Stanka Kordic, Martin O’Connor, John A Sargent III
and I couldn’t be more thrilled about it! 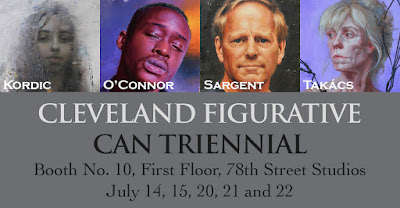 My epic work, The Love, Athena Triptych, debuts at The Art Loft Zanesville, First Friday Artwalk, March 6, from 5:00 to 9:00.

Gallery Talk:
Beyond Chicks with Balls: The Goddess Project
Thursday, March 19, 6:00 to 7:00
The Art Loft Zanesville
26 North Third Street, Rear
Zanesville, Ohio
Using the Love, Athena Triptych, as a starting point, this is a wonderful opportunity to learn all about this epic painting that bridges the gap between my Chicks and Goddesses.
Details on the facebook event page.

The Second Chicks Book is coming!

Launching, February 13, 2020, 5:00 to 7:00 at the Opening Reception of Chicks' first solo museum show at the Zanesville Museum of Art. Books will be for sale, and Judy will be available to sign books at the opening, and at the gallery talks.

Give us a “like" on the new facebook page, Chicks with Balls: Judy Takács paints unsung female heroes.

Click “Get Notifications" and “See First" to stay up to the minute with Chicks!