Venus, She’s Got It… 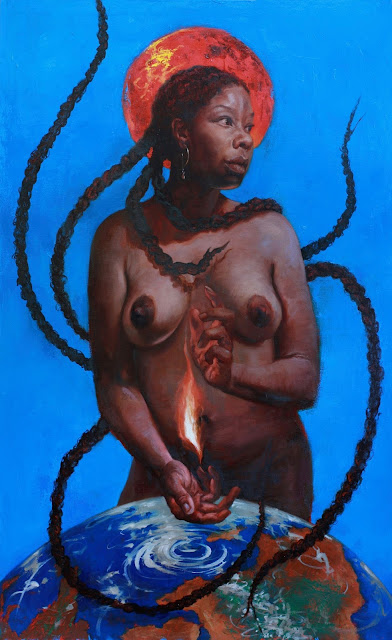 In 1967 Mariska Veres sang these words with the band, Shocking Blue and they have occupied my head ever since I began researching and painting, She’s Got It  for  Poets/Artists Visions of Venus/Venus’ Visions exhibition at the Zhou B Art Center in Chicago. Sadly, my work wasn’t accepted into the show…but the whole project resulted in several paintings I love, so it’s all good!

The shocking blue background, the flame, the planet(s) and my beautiful and sensuous Venus; a recent mother…not quite “black as the dark night,” all came from the song. My Venus’ artful braids were real, but I multiplied, embellished and brought them to life…much like Botticelli did with his Venus’ flowing hair.

As I researched this most-famous Goddess of all time, I found that she is more than the welcoming, fleshy, pale and pampered woman languishing about in so many Renaissance paintings.

The Goddess of Love and Desire, sprouting from a shell…or from sea foam…(depending on which artist you ask) fully formed, is also the Goddess of Peace, softening the swagger and violence of her male counterpart, Mars, the God of War.

Wikipedia tell us that, “In myth, Venus/Aphrodite was born of sea-foam. Roman theology presents Venus as the yielding, watery female principle, essential to the generation and balance of life. Her male counterparts in the Roman pantheon, Vulcan and Mars, are active and fiery. Venus absorbs and tempers the male essence, uniting the opposites of male and female in mutual affection. She is essentially assimilative and benign, and embraces several otherwise quite disparate functions. She can give military victory, sexual success, good fortune and prosperity.”

Interpreting the Mythology (as all artists have throughout art history)…I saw Venus as more a Prometheus character. Prometheus is the Demi-God who brings fire from the Gods to the mortals of the earth and is punished for it by being strapped to a rock to have the vultures eat his liver for all of eternity…the Rubens’ painting in the MET makes this horrifically graphic.
For my painting, I interpreted Venus as a symbol of the African American Woman. Her gift of fire; whether its tending the home with the cooking fire, the fire in her heart to achieve, the fire to love, the fire to create, the fire to fight for justice and the fire to bring forth new life and to nurture it…is historically unrecognized, unappreciated, diminished and often destroyed.

My painting, however is hopeful. Her expression is concerned but peaceful as she graces a non-Euro-centric perspective of the earth beneath her fingers. Look closely, Africa is on top…and why shouldn't it be? The universe is three dimensional, there is no up or down, but the globe-makers were European, so Europe is depicted in the top half of the globe every time. I show my Venus’ vision and her unique viewpoint.

And, her flame is burning brightly as she peacefully presents it to the world…again.

Venus, She’s Got It…will be showing at my Two-Artist Inaugural Exhibit with the late Marilyn Szalay at the Artists Archives of the Western Reserve.
Mark your Calendars for the May 24th opening reception. 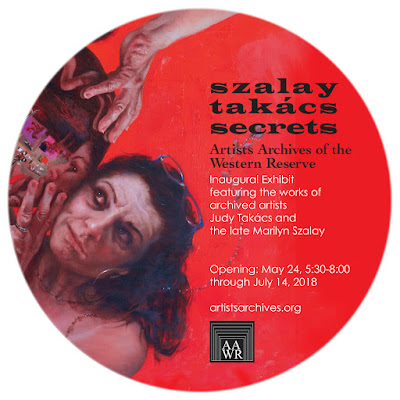 Szalay…Takács…Secrets
Artists Archives of the Western Reserve
Opening Reception: May 24, from 5:30 to 8:00
Show continues through July 14, 2018

Posted by Judy Takacs at 5:07 AM No comments: