There’s an episode of Star Trek where the transporter malfunctions and splits you into two versions of yourself during the beaming up process.  One of you is all good and the other one is all bad. 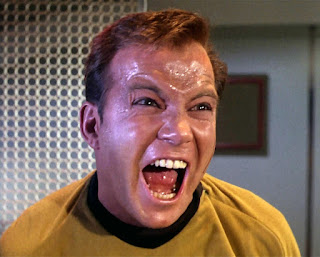 Thanks to filtered vs. stark lighting effects, melodious vs. bravura fight music and of course William Shatner’s razor-sharp acting skills…he can pivot on a dime between tortured closeups and the charming eye twinkle… we very quickly figure out which Captain Kirk is good and who is the evil twin. 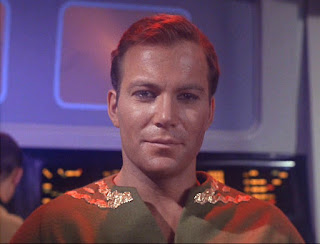 It takes the whole episode, however, to learn the true moral of this episode; that, in order to be a fully effective captain of a starship, one needs to embrace their good and evil sides; to temper kindness with strength, to temper nuanced deliberation with decisiveness, to temper heart with balls. 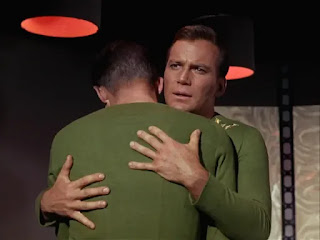 The same balance between good and evil is also imperative for the characters from the Judeo-Christian Bible who many believe rule and shape our world.

In the Judeo-Christian bible, the Devil began in heaven as an angel. He tried to organize a coup, which obviously angers God, who thrusts him out of heaven…Lucifer, the fallen angel. In the bible, God doesn’t actually put Lucifer in charge of Hell, but the piggy-back mythology surrounding fun-to-hate, fear and illustrate Satan, grew exponentially with the coming millennia.  The Devil’s job title grew closer to that of Hades, Lord of the underworld in Greek Mythology. Art, literature, politics, religion and power put Satan in charge of Hell as its evil ruler…pitchfork, fire and brimstone at the ready to punish you for eternity for your sins.

Satan is pure evil. God is pure good…or is that mythology too?

My conjecture is that without the threat of punishment, Gods admonishments to behave can fall on deaf ears…not all of us are good just “for goodness sake”…as the atheist and agnostic mantra goes.

It’s like a town without a police department. Judge and Jury with no executioner.

The Necessary Evil Triptych is the latest painting from The Goddess Project, where I re-imagine the characters from the mythology of all the religions through a contemporary and analytical feminist lens.

My conjecture is that Satan does God’s dirty work. Though in the Old Testament God does plenty of His own dirty work…sending plagues, floods, obliteration, torture, mass killings of adult sinners and innocent infants alike…destruction to punish those who don’t obey the myriad list of rules He has set forth…don’t kill each other, don’t steal, don’t eat shrimp…

And, in punishing the guilty, the devil is actually doing the tough and thankless job of meting out justice…which, as citizens of the United States, we hold dear as a very good thing indeed.

The Devil is Bad Cop to God’s Good Cop.

God is Judge and Jury, the Devil is Executioner.

Rewards, as well as consequences are necessary to live in a fair and just society.

The branches of justice work together.

I have re-imagined God and Devil as old friends…as women…getting together for a long and soulful breakfast chat (in bathrobes with endless coffee) about what the heck they should do to fix the world.

Brainstorming ideas, they have at their disposal, plagues, locusts, frogs, apples of temptation.

God has brought a holy grail…but it is tipped implying that perfection on earth will never be achieved…perfection IS the holy grail.

Satan’s former angel wings are disheveled and torn, but she still wears them.

The cheeky devil, a twinkle in her eye, tries on the halo for size.  She ultimately passes it back to God to wear. God chuckles at this, but also recognizes the irony.

This painting revisits the theme that when wise women put their heads together, much can be achieved, heaven and earth can be moved. I don’t actually believe that the devil or Hell…or Heaven for that matter…actually exist, which is why I have presented this concept in a playful manner. As for the existence of God? That’s a personal and complex belief system that I don’t peddle and appreciate when others don’t peddle theirs to me. I tell people I’m a freethinker who believes in peace, love and respect.

I also believe in the power of women to save the world…we can, we have, we will, and we will again…and again!

Thrilled to let you know that the Necessary Evil Triptych
has been juried into the 12th Annual May Show at Lakeland.
Organized each year by Gallery Director Extraordinaire, Mary Urbas,
this year it was Juried by Janet Bloch,
of the Lubeznik Center for the Arts in Michigan City, Indiana.

It's a fabulous show that you can definitely spend a
good couple hours walking through.
Generous gallery hours!
M-F 9:00 to 9:00 Saturday 9:00 to 5:00
Closed Sundays, Memorial Day, May 31 and July 4th
Open now, the show continues through July 15th at:

My first solo show in two years, opens at Chagrin Arts, Sunday March 6th with a reception from 2:00 to 4:00

More than four years in the making, The Goddess Project is my new series where I re-imagine characters and stories from the mythology of all the religions through a contemporary feminist lens.

My solo show in the beautifully renovated Chagrin Arts gallery space right on Main Street in Chagrin Falls, is a collaboration with the Ohio Innocence Project which advocates for and fights to free those who have been wrongfully incarcerated. I will be showing a selection of paintings of Goddesses and women from mythology, who have been wrongfully accused, unfairly punished and held captive. Through my feminist lens, these heroines ultimately prevail.

For years now, Chagrin Arts has allied itself with the Ohio Innocence Project, a legal team whose mission is to fight for and free those who have been wrongfully incarcerated, sometimes for decades. They also work to fix the legal systems that convict the innocent. On March 20th I will participate in a panel discussion with the Women of the Ohio Innocence Project…true Goddesses themselves.

The March 6th Opening Reception will also be the book launch for my Goddess Project Book, which tells the stories behind all the paintings in the Goddess Project. 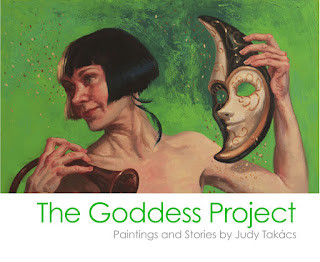 The Goddess Project: Innocents
A Panel Discussion with artist Judy Takács and Women of the Ohio Innocence Project

Gallery viewing right across the street at Chagrin Arts follows at 3:00 to 4:00

Posted by Judy Takacs at 8:21 AM No comments: