Mary, as Luna, Goddess of the Dung Beetle Ball

The story behind this painting begins in the middle of the most harrowing time in Mary’s life.

It was a time whose concerns did not include breast cancer…until they did.

Its never a good time for a breast cancer diagnosis, but because she put her family’s concerns ahead of her own, she ignored symptoms that otherwise would have been dramatic and alarming.

After a slow and tumultuous several years battling the cancer, Mary was left happily in remission with a double mastectomy.

Not wanting to endure continued surgeries, recoveries, complications and also needing to get back to the easel (she’s a phenomenal artist, and founder and director of Hull Art Academy of Art in Dallas, Texas)…Mary made a sensible and measured decision to forgo reconstructive breast surgery.

This simple and logical, personal, cosmetic decision was met with extensive pushback from armchair psychologists and nosy acquaintances.

Some folks actually asked her if she was trying to become a man.

There were women who inexplicably said they’d be concerned if their husband still found them to be sexy with no breasts.

Even doctors put intense pressure on her to reconsider, using sexist generalizations about how a woman’s self-esteem is related to her breast size.

She was also strongly advised to clear it with her husband and consider his feelings on the matter. He was all but asked to sign a consent form agreeing to keep a wife without breasts.

Because her husband is a loving and supportive best friend, his response was, “Unless you’re filling them with beer, I don’t know why my opinion matters.”

One of the unexpected issues with choosing to remain breast-less is that no plastic surgeon will tidy up the extra skin so your body will look smooth and intentionally breast-less.  Mary was told by a plastic surgeon that they only do surgery if you’re changing the size or shape because you’re not happy with what you have…not if you’re removing them.

Before disrobing for the posing session, Mary braced me with dire warnings of what I was about to see. In Mary’s eyes, she saw sagging skin with puckers, dimpling and scarring. I geared up to not display shock, or even wince…never having seen a double mastectomy in person.

Her warnings were, in my eyes, very much unfounded, and her breastless-ness seemed very natural and quite lovely…exotic, other-worldy even.

Thus came the inspiration to interpret her as a mythological character.

I cast Mary as the Roman Goddess Luna; embodiment of the moon, driving her horses and chariot across the night sky.

Mary beautifully navigates her sometimes tumultuous life and identifies with the humble dung beetle, who literally takes the shit of other animals and rolls it into positive action.

Dung beetleballs are created by dungbeetles to attract mates, store food, and safely house and feed baby beetle larva. Their production is a methodical process where the beetles roll the dung of other animals in a single direction away from their original source, using the heavens as their guide; sun by day, moon by night. After the dung ball has finished its job helping beetles pro-create and survive, it returns to the earth to fertilize new plant growth that will feed other animals whose dung will continue the cycle.

Mary’s shit…hand-typewritten words from naysayers and doctors about her cancer and decisions …is rolled into her giant dung beetle ball as she marches forward in life, rolling it into positive action. 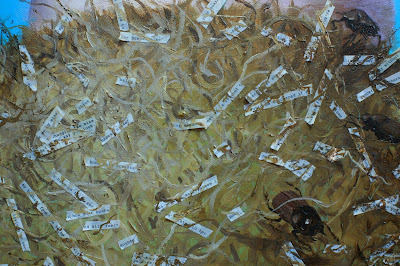 And Why Mythological Characters?

As I march forward in my art life painting people…especially women of strength and courage, I am shifting focus from my Chicks with Balls series to other forms of inspiration and imagery.

I, like countless artists and authors before me, have found a very deep well of stories, themes and fantastical details in mythology. And by mythology, I mean the tales, legends and beliefs from all the religions; Pagan, Ancient Greek, Jewish, Islamic, Christian, Hindu…wherever there are colorful characters with stories to tell. These fictions have inspired art, literature, fairy tales and belief systems for eons. Their lessons and warnings reflect the prejudices, ignorances and injustices of the time they were written, and have endured because of timeless characters to become deeply rooted in our contemporary subconscious…for better and for worse.

I’m excited to explore these concepts and re-examine classic mythological characters and tell their stories through a contemporary lens. I dispel stereotypes with the #Me(dusa)too diptych, and put non-traditional bodies into action via my Venus interpretations and the Winged Victory triptych.

Mary as Luna bridges the gap between my Chicks with Balls series and my Goddess series, so she holds a very special place.

Because Mary’s portrait is part of the Chicks with Balls series too, it was shown at the Zanesville Museum of Art as part of my first ever, solo museum show!
And now, she's traveling again…

Posted by Judy Takacs at 7:31 AM No comments: