Once upon a time, Fred Bidwell, Cleveland’s generous and highly active art patron and benefactor, along with Artistic Director, Michele Grabner…masterminded a Cleveland art event the likes of which had never been seen.

This summertime festival and Northeast Ohio-wide art event would be called FRONT International, and take place across many of the major art venues that Cleveland is so rich in (CMA, MOCA, CIA, Spaces and many more…some surprising!) during the Summer of 2018.

Hand picked international artists with a connection to Cleveland would be invited to create works, projects, films, installations and use all manner of creativity to address the theme of An American City…Cleveland.

The publicity and international recognition generated by this event would be the boost that Cleveland…and lovers of “the land”…are always looking for.

So, masterminds on the board of Cleveland’s own CAN Journal; Liz Maugans, Michael Gill, Nancy Heaton and many others…put their heads together.  CAN (which stands for Collective Art Network) is a unique Art Journal and networking group dedicated to the promotion of all things Art in CLE. Plans were made to stage our own event to spotlight Cleveland artists during the FRONT International events in Summer of 2018.

This CLE event is called the CAN Triennial and takes place at the iconic 78th Street Studios, on Cleveland’s West side. In their own words, THIS is what CAN Triennial is:

“A gathering of exemplary contemporary art from Northeast Ohio, featuring new discoveries, rising stars, and the region’s most accomplished artists. An exhibit filling three floors of the 78th Street Studios with painting, photography, printmaking, sculpture, fiber art, music, film, and site-specific installations. A Gallery Pavilion bringing together 20 of the most selective dealers from Northeast Ohio and surrounding cities. A deep dive into the creative minds of Cleveland.”

The 78th Street Studios is the former American Greetings Creative Studios…turned warehouse…turned art mecca. It houses artist studios, galleries, hosts weddings, events and the coolest monthly Third Friday Artwalk our town has ever seen. It made perfect sense to make this the one stop place to showcase Cleveland Artists for International Art tourists (apparently there is such a thing!) coming to town for FRONT International!

Thus was born my role in all this:
CLEVELAND FIGURATIVE 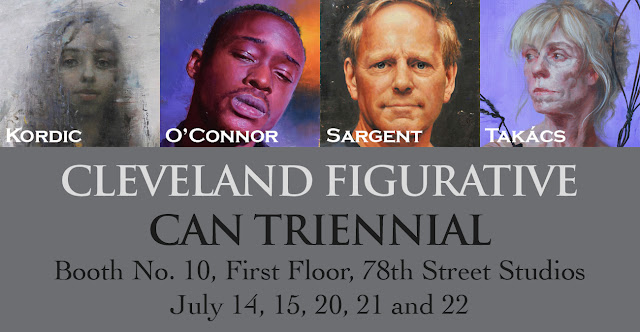 I gathered just a few of Cleveland’s foremost figurative realists to share their work at Booth No. 10, CLEVELAND FIGURATIVE at the 78th Street Studios, during the CAN Triennial Art Event.

Contemporary Figurative Realism is a movement that has been brewing on the coasts for over a decade. Cleveland’s own figurative artists have also been passionately painting humans with an eye to truth, beauty and the beauty of the truthful depiction…physically and emotionally.

To own a masterful depiction of a human soul is to bring empathy into your home. Contemporary Figurative Realism invites viewers to feel something for and with another person on this planet; to smile, to be touched, to connect, to linger and think.

Visit us at Booth 10 during the hours below to make friends with the artists and discover the beauty of the human souls who have been so lovingly painted.