Eve was the first mortal woman created in the Judeo-Christian Religion.

Pandora was the first mortal woman created in Greek Mythology.

In both stories, the consequences of this first woman’s intellectual curiosity is the downfall of all of humankind.

These stories stand as a warning to all women to obey orders and squelch intellectual curiosity. The far-reaching fingers of this concept are laws that have kept women from education and control of their bodies, finances and property for millennia.

If you’re tired of reading already, you can watch my New Year’s Eve Epiphany episode of Living Figuratively where I introduce both these paintings…otherwise, keep reading!

Delving deeper into these parallel stories was fascinating.

According to the mythology, before Pandora was created, the mortal world of the Greeks was an all-male society where the guys were obedient to the Gods, enjoyed each other’s company and all was fine.

But, then Prometheus, kind demi-god that he was, decided that these dudes might be chilly at night and should also be able to grill their food…so, he gave them the gift of fire, which, up until then was reserved for Gods only. Zeus became quite angry at this and had poor Prometheus strapped to a mountaintop to have his liver eaten by vultures each day, only to grow back each night and repeat the process the next day.

Not quite enough to satiate the God’s anger, Zues also wanted to punish the mortal men who were now enjoying fire.

So, Zeus created Pandora… the first mortal woman… as a disrupter to their blissful grilling and nightly campfires.

When she was created, Zeus gave her as a “gift” to, of all people, Prometheus’ brother. She was a gift who came bearing a gift… a fancy and jeweled box which she was forbidden to open.

Pandora, because she was curious…intellectually curious…disobeyed and opened the box anyway.

Apparently opening the box unleashed all the evil into the world. The only thing left in the box was “hope.”

Scholars are confused on this…does this mean we still have hope? Or that we have no hope because it was not released into the world?

Either way though, the disobedient curious woman messed everything up by seeking knowledge. Though, ironically, she did exactly what Zeus had her made to do…which was to mess things up on earth…but she doesn’t even get credit for carrying out the mission successfully.

Different woman, different details, but story was repeated in the Judeo-Christian bible, when God created the first mortal woman…Eve…as a wife to the hapless Adam.

In this story, God gave them lush gardens, good food, animals to lord over, and an order to have lots of sex and babies. (an order that gets dredged up as religious freedom whenever companies like Hobby Lobby don’t want to pay for health insurance plans that include birth control.)

There was just one condition.

Do not eat fruit from the Tree of Knowledge.

Adam was down with that… lush gardens, stay naked, have lots of sex, skip the apples, don’t ask questions…got it!

Eve, however, had higher aspirations and decides to try an apple from the Tree of Knowledge.

She shares it with her husband…and, here again, all hell breaks loose! God banishes the couple and all of humanity from the Garden of Eden to suffer on earth forever after.

I don’t buy this. Both are stories made up by men to control women.

Through a Feminist Lens

I have reimagined Pandora and Eve, and shown them being rewarded for seeking knowledge; delighted and intrigued by the knowledge they have discovered.

Pandora’s box is not a sacred and forbidden thing, but a box of books from Amazon!

I’ve put some intentional symbolism into the books…

You’ll see Toni Morrison’s Song of Solomon, Dalma Takács’ book on the afterlife, The Condo, Joyce Carol Oates’, Because it’s Bitter and Because it’s my Heart, an ancient bible, Edith Hamilton’s Mythology and, because I had an epiphany during the painting process, the last book left in Pandora’s box is Obama’s “The Audacity of Hope.”

Eve has bitten from the apple…she has, in fact, enjoyed many apples.

The snake is a skinny harmless one and a bit-player in her quest for knowledge. I show her enjoying the books…ergo knowledge…that she has discovered.

She is also not covering herself with ivy…because she has not discovered shame about her own body like the bible story says she did.

Epiphanies abounded during the creation of these two paintings, but they all began with my beautiful model, whose name is actually Epiphany! Follow her on Instagram as epiphany.cp and on facebook as Epiphany Perkins.

She was wicked fun to paint, and I even did some smaller studies of her before I tackled the actual painting. Both are available at my online shop, judytakacs.com

Her close cropped short natural hair was a dream. It was perfect to show the essence, the beginning, the first mortal woman created…in both these religions. She’s a beautiful model and a lovely person too.

Here is a study I did to prepare for the Eve painting. She’s available, framed in silver and ready to ship from my online shop. 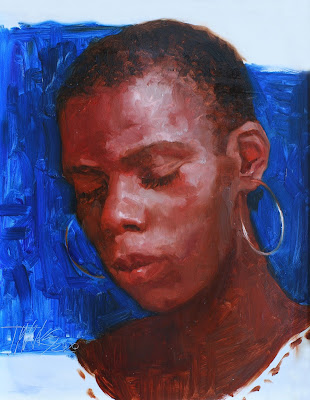 and below is a study I did to prepare for Epiphany of Pandora. Also, framed in silver and ready to ship…and also available at my online shop. 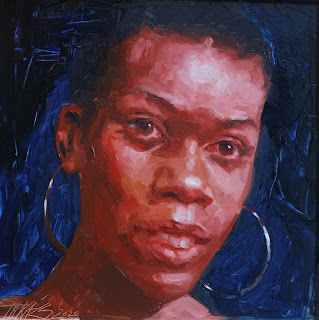 If you’re wondering why I chose a Black woman to portray the first mortal women created, I will ask you why wouldn’t the first woman created be black? Really why not? Neither the Judeo-Christian bible, nor Greek Mythology ever says that God…or Zeus…was white or created white people first. It was the western and Renaissance artists that interpreted biblical and mythological characters as European-looking white people so that’s how we’ve come to think of them.

Artists have great power to implant images in our heads, so, for my paintings I show Eve and Pandora as the same beautiful black woman…because it’s the same story.

Also, think about great black women in history and today, Harriet Tubman, Rosa Parks, Angela Davis, Kathrine Johnson, Shirley Chisholm, Kamala Harris. They were and are intellectually curious, and sometimes put into positions where they had to disobey the rules in order to do what is right and help generations to come.

The moral of MY story is that women should absolutely seek knowledge. Be curious, learn, investigate…the world won’t crumble, but we just might save it!

And when I say, “women” rest assured, I mean men too, and all the genders. We should all seek knowledge.

Posted by Judy Takacs at 2:00 PM No comments: